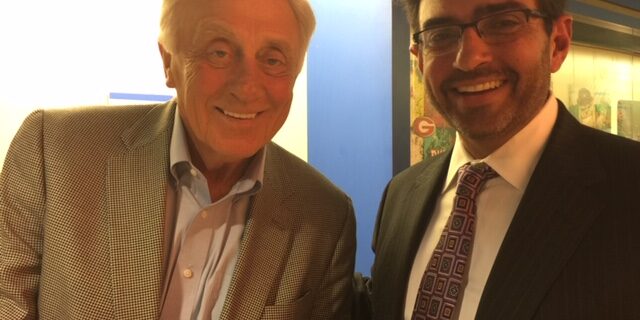 Before there was Tom Glavine and John Smoltz, or even Mike Soroka and Max Fried, there was Phil Niekro. He was the Atlanta Braves for so many years when a team that would later be identified with pitching had so little of it.

When I was eight years old, in 1978, I started watching the Braves. The only pitcher on that team who was really good was Niekro. He completed games. He struck people out with a fluttering pitch called the knuckler. And he won, as much as a pitcher on a bad team could win.

You waited for Niekro to pitch, usually every fourth day or even every third day in those years. That was when it was worth watching the Braves on old WTCG. When you went to a game, you hoped Niekro was pitching.

In 1979, Niekro came to my hometown, Waycross, Georgia for a ceremony. It was actually four blocks from my house. My mom got me out of my third-grade class early to go see him. I couldn’t believe it when I saw him. It was really him. It was Phil Niekro.

After the ceremony, she asked him if he would go inside and take a picture with me. He said he would, and he introduced himself and shook my hand. I was petrified. We sat on a sofa and I was a few feet away from him. He took his left arm and brought me closer to him and said, “Come here, I’m not gonna bite ya.”

What a thrill. From that day on, I would throw a knuckleball. I copied Niekro’s delivery so well that when I was in high school, a coach from Frederica Academy would shout out “knuckler” when he knew I was throwing one.

And we all know that if he had gotten one more out in game one of the LCS against the Cardinals, the Braves might have won that series in 1982. The game got rained out, and Niekro instead started game two after the Braves lost the first game that had started from scratch without him.

I was heartbroken after the 1983 season when the Braves released Niekro. It was awful to lose someone who had been so much a part of the team. And you knew he was heartbroken, too.

He was 44 at the time, but he still wanted to pitch, and he only wanted to pitch in Atlanta. Joe Torre, the manager, and Bob Gibson, the pitching coach, thought Niekro was finished. Well, he would go on to win 32 games in New York with the Yankees, to win his 300th career game at the end of the 1985 season, and then 18 more games with Cleveland.

Those few years he was gone, winning games for other teams, even in his mid-40s, were horrible. The Braves were also horrible, almost like they deserved it after getting rid of their soul. He was the heart and soul of that team every year he was on the roster.

This man loved the Atlanta Braves. He never wanted to leave. And he had to come back.

In 1987, when his career was coming to an end, he wanted to finish in Atlanta, in that Braves uniform. I was there. Since I was doing a sports talk show then, even at the age of 17, I was able to get tickets and a press pass. It was incredible to see him pitch just one more time, in that uniform, even though it was clear his batteries were running out.

Niekro only pitched three innings that day. The fans were furious when Chuck Tanner popped out of the dugout to take Niekro out. He took his bow, hugged his catcher, Bruce Benedict, and departed.

And, of course, after he left the game a Braves reliever came in and gave up a grand slam. That happened to Knucksie a lot in his career. Pretty typical.

That game was sort of a passing of the torch, in a weird sort of way. Glavine had made his MLB debut about six weeks earlier, and the Braves never-ending search to find their next Niekro had finally produced someone special.

It was always believed Niekro would manage the Braves. There were rumors when they had openings in 1978, 1981, and even in 1984. But it never happened. He managed in Richmond, Atlanta’s Triple-A affiliate, in 1991. But that was it. He instead settled for spring training appearances just being Phil Niekro.

He went into the Hall of Fame, as a pitcher who won 318 games, in 1997. And we all know if he had played on more winning teams, he truly could have won 400. Heck, he didn’t make his MLB debut until he was 25, and he didn’t win his 10th MLB game until he was 28, when he joined the Atlanta rotation. And there were plenty of years when his record was close to .500, just because the team he was on was so bad.

Don’t let Niekro get lost in the history of this franchise. We all know the trio of Glavine, Smoltz, and Greg Maddux changed the Braves. But Niekro was the first special pitcher for the Atlanta Braves. Warren Spahn was a Milwaukee Braves pitcher, while Niekro was all Atlanta.

Baseball fans all over the south will be sharing Niekro stories this week. It’s sort of surreal when your heroes start to die, and for those of us who grew up rooting for the Atlanta Braves, watching games at the old stadium with it mostly empty, there was no one better than ole number 35.